1. Superannuation is not an investment

Superannuation is not itself an investment – rather, it is a vehicle designed to make investing for retirement more attractive by limiting the amount of tax that is paid within the fund. It is therefore simply a tax structure.
Subject to certain rules, a super fund can invest in virtually any of the assets that a member could invest in personally. Most super funds offer members a choice of how they invest. These can range from conservative options invested mostly in cash and fixed interest to highly aggressive options invested exclusively in shares and property.

The media may add to the confusion about super fund performance results with headlines such as ‘Super gets returns of 15%’ or ‘Your super goes backwards’. The inference is that all super funds are the same, which is not the case. Usually, the media is talking about balanced funds in super, often the default investment option when members make no choice themselves. However, even balanced funds are not all the same. The balanced option in one fund may have 70% invested in growth assets, whereas the balanced option in another fund may have only 50% invested in growth assets.

2. Superannuation is not for everyone

Superannuation gets ‘talked up’ so much that the implication is often that everyone should have super. In fact being forced to have super, particularly those on lower incomes, disadvantages some people. Let me explain.
Employer and other concessional contributions are taxed at 15% in super, and investment earnings are taxed at 15%. Capital gains in super are effectively taxed at 10% where relevant assets are held by the fund for at least 12 months.

A person earning a taxable income of $44,000 will have an effective tax rate of less than 15% when the low income tax offset (LITO) is considered. Compare this to the 15% tax that applies in the super environment and it’s clear super is not a good strategy, tax wise.

One of the potential drawbacks of the superannuation guarantee (SG) is that an employee does not need to take any action to receive it. Their employer arranges it all. Because of this, it is easy for an employee to forget it. If the employee earned $50,000 a year, the SG would be $4,500. If this amount were included in their pay, they certainly wouldn’t forget it.

The SG is calculated every payday by an employer as 9% of ‘ordinary time earnings’. The employer is required to pay the SG contributions for each financial quarter into super by the 28th day of the following month (except for the December quarter when they have until 28 February).

Employees should confirm that their employer is calculating the SG correctly and that the contributions are recorded on their annual benefit statement.

4. Contribution caps are an individual’s responsibility

There must be some limit on the tax concessional super available to any individual, otherwise many would take unfair advantage and our tax system would start to fail, with an unfair burden faced by those who couldn’t afford to divert funds into super.

No one (with the possible exception of a financial planner) monitors whether the member is at risk of exceeding the caps. It is the member’s own responsibility and they will usually only discover the extra tax six to nine months after the end of the tax year.

The good news is that super was reviewed and in the 2013 Budget it was announced that the government will scrap the excess contributions tax and that it will slightly increase the contributions cap. At the time of writing it is yet to become law.

In the past, superannuation was only for the employed. The restrictions on who can contribute to super have been relaxed over the years and from 2004, anyone under 65 (whether they are employed or not) has been able to put money into super.

Superannuation funds pay tax at a flat 15% on all their assessable income. This includes concessional (tax deductible) contributions and investment earnings such as interest, rent and dividends. In practice, most super funds pay tax at less than 15%.

Statistics released by the Australian Prudential Regulation Authority (APRA) indicate that most members remain in the default balanced investment option in large super funds. A balanced fund usually has 25 to 35% invested in Australian shares and so the imputation credits and other tax concessions on those shares could reduce the effective tax rate of the fund to less than 10%.

7. Life insurance in super can be tax effective

On the death of an individual, life insurance provides a lump sum to pay off debts and support dependants and it can provide capital for other purposes. Life insurance can be arranged privately or through a super fund.
The advantages of having life insurance in super are:

Many super funds will allow the member to buy extra life insurance, though this is likely to require a more detailed underwriting process. There are also circumstances where holding life insurance privately would be a better arrangement. This is an area where a skilled planner can help.

8. Super funds will (sometimes) pay out before retirement

While super is for retirement, there are circumstances when it can be paid out (in full or in part) before retirement.

These are legitimate ways for the member to gain access to their super. The super regulators are concerned about schemes where members access their super early and illegally. Promoters of such schemes have had legal action taken against them and members have had tax penalties imposed on them.

9. Super is tax free from age 60, but retirement comes first

When the major super changes came into effect from 1 July 2007, the headlines said ’Super is free from age 60’. Some members misinterpreted this to mean that they could claim their super tax-free at age 60. To be able to access super as a lump sum, a member must satisfy a ‘condition of release’. Usually this will mean they have satisfied a Superannuation Industry (Supervision) Act 1993 (SIS Act) retirement definition. The three definitions are:

This so called ‘compulsory cashing’ rule has since been abolished. Members can access their super when they satisfy a condition of release. However, the only time their super must be paid out is on death. This creates new opportunities for members, including:

11. A pension can carry on after death

When an individual dies, the social security age pension for that person stops. If they have a partner, their age pension will increase to the higher single person’s rate – but this is less than the combined age pension received by a couple. The surviving pensioner will be subject to the single person’s income and asset tests so they may not receive the maximum pension.

12. Superannuation is more than just a retirement nest egg

The ‘compare the pair’ advertisements oversimplify super. Super is portrayed as being nothing more than an investment and that the fund with the lowest fees will generate the largest retirement benefit. There is much more to super – in terms of investment choices, taxation and things like life insurance and more.

A good adviser can tailor a super fund to suit the current and future needs of a client as part of a complete financial plan. For example, the adviser could:

The changes to super legislation, although thankfully not regular, are a good reason why super isn’t completely set and forget. A good adviser can keep you abreast of the changes, including product changes, and ensure you’re taking full advantage of any changes. And hopefully, after reading this book you’ll understand why a good adviser makes sense and you’ll choose one who can maximise all your financial arrangements.

‘Ziggy’ is one of Australia’s most personable holistic financial planners. Read More…

Get the first 2 chapters of my bestselling book 'Money Does Grow On Trees': 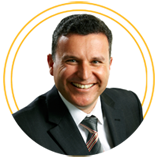